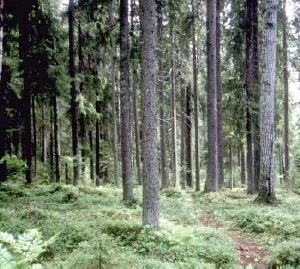 Back in the 1960s and 1970s, service foresters working for the state or for cooperative extension marked a lot of timber sales for landowners. I was one of those foresters in New York, and I thought I did a fair job of marking timber. After those years behind the paint gun, I had the opportunity to learn from USDA Forest Service foresters Ben Roach and ArlynPerkey. Having spent time with them in the woods, I went back to my work in Albany County and walked some of my old timber harvests, looking at them with a critical eye.

These fine gentlemen encouraged me to look at the forest with a longer management view and pay much more attention to the trees left for the future. Prior to working with Roach and Perkey, I seldom left trees larger than 20 inches in diameter and probably never trees over 24 inches. That changed when I saw that trees do not necessarily stop performing well at these diameters. Today, after a career with the Department of Environmental Conservation, the last decades of it behind the desk as an administrator, I’m back in the woods as a consulting forester. Now, I routinely save larger trees if they are growing well enough to be left for a future harvest.

In 1999, a client named Jimmy Bulich in Catskill, New York, hired me to assist with a sale. He was interested in learning about the process, and he accompanied me while I marked the timber. He wore the paint gun, and I told him which trees to squirt, while I recorded them on my clipboard. He saved money by making my work more efficient, and we had the opportunity to carry on discussions about his woodlot and tree selection.

One particular tree caused us to stop and talk for a while. It was a hard (sugar) maple with a 24-inch diameter in a northern hardwood/hemlock stand. Its bark showed that it was a fast-growing tree: tight and smooth, with a tan color showing through because it was being stretched. It was the stand’s dominant tree and perhaps 100 years old. The tree had 441 board feet in it and would have been worth about $441 in a sale of woods-run maple, because maple was bringing in $1000 per thousand board feet (MBF) at that time. I told him I would like to mark the four hemlocks surrounding this tree that might bring him $5 to $15 and leave the maple for another 10-year cycle. I told him that hemlock wooly adelgid was a potential threat and that the maple was a better investment. My client agreed with my recommendation.

Five years later, we brought State Extension Forester Peter Smallidge over for a tour. Bulich’s woodlot, with its limestone soils, is particularly well suited to maple, though it also has oak and black birch. The maples were thriving, and when we came to this particular maple, we remeasured it. It had grown to 26 inches in diameter with 528 board feet. The thinning of the hemlocks throughout the stand had allowed a carpet of sugar maple seedlings to advance to about four to six feet tall.

During another forestry tour in 2007, the tree measured over 28 inches for an estimated 616 board feet. By now, the two 16-foot logs in it have become three, so it measures 850 board feet. Now worth $850, this tree had nearly doubled in value in eight years.

The increased value came purely from volume growth, not from reaching a higher grade. The maple had put on four inches of growth in eight years, a rate of a half-inch per year, which you can only expect of hard maples that are large, dominant trees on good sites. Typically, it would take a maple 12 to 16 years to put on four inches of diameter. The maple regeneration in Bulich’s stand, now that it has advanced above the deer browse level, has taken off and has specimens reaching up to 20 feet tall. And although, unfortunately, the hemlock wooly adelgid has arrived here and another hemlock harvest is underway, the maples are being reserved because they continue to grow well.

It’s true that hard maple stumpage prices have fallen dramatically in this current economic slump, and today no mill is paying a woods-run price of $1000/MBF. It’s also true that letting a 28-inch maple ride through another 15- or 20-year harvest cycle is not without risk. Damage from insects, fungi, ice storms, and an increasing heart size can all devalue a sawlog. But I believe it would be a mistake for the owners to sell now. They can wait for markets to rebound. The trees are putting on strong growth, and in spite of the current market, the owners are better off growing high-quality hardwoods than declining hemlocks.

Whenever landowners contemplate selling their property, I urge them to resist the temptation to cut the best trees. I believe prospective buyers can be educated about the value of buying a well-managed woodlot. Having a cut supervised by a conscientious forester before passing on the property can capture some of the timber value, improve access to the property, enhance wildlife habitat, and make the property more saleable than one that has been subjected to an exploitive cut. The key is controlling what trees are cut and what trees are left for the future. At a time when so many of us are lamenting losses in the stock market, a well-managed forest can be your most valuable investment.