Architect of the Timber Age coming to Maine 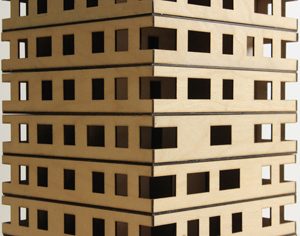 An evangelist for wood construction is coming to Maine. Anthony Thistleton of the pioneering London firm Waugh and Thistleton headlines a diverse lineup of presenters at the Wood Innovators Conference in Hiram Oct. 22.

It was Waugh and Thistleton’s nine-story Stadthaus apartment building in London in 2009 that ignited the worldwide competition to build the tallest wood building. The new record is soon to be set by another team and 19-story building under construction in Sweden.

“The 20th century was very much the concrete age,” said Thistleton. “[Partner Andrew Waugh] and I very much believe we are at the dawn of the timber age.”

That should be a resonant message in Maine, the most heavily forested state in the nation but one that has seen some severe shocks to its biomass and paper industries. Wood’s modern appeal is its capacity to store carbon absorbed from the atmosphere by trees, explained Thistleton in a telephone interview. It’s a double benefit to construct large buildings, bridges and other infrastructure in wood. It frees up the next generation of trees to store carbon and it displaces carbon-emitting steel and concrete as a construction material.

“Climate change is very much at the forefront ot its appeal,” said Thistleton. “I think in the future, when we look back, this will be seen as a transformative technology.”

It was not the climate benefit that first attracted Thistleton to mass timber construction. It was the speed of construction. Mass timber or cross-laminated timber technology involves building with wall-sized, solid-wood panels prefabricated off-site and assembled like a piece of Ikea furniture. It solved a unique challenge for Thistleton in 2003 when the firm was hired to design a small addition to a school building. There was no access to the site, except through a heavily-used parking lot on an adjoining property.

“We couldn’t find a way to do it,” said Thistleton. Then they discovered CLT technology, pioneered in Switzerland and Austria in the 1990s, but never before used in the UK. That enabled them to pre-fabricate the addition off site and take advantage of a brief window of opportunity on a Saturday afternoon. “We had the whole thing built in six hours,” he said.

That is the message Thistleton tries to hammer home: you don’t have to be a climate activist designing a prestige building. “It’s the simplicity and speed,” said Thistleton. “It’s a better way to build – fast, quiet, accurate and clean.”

Waugh and Thistleton’s most famous building is not much to look at architecturally. It’s a box with balcony cut-outs at the corners. And the developer was decidedly agnostic about wood as Thistleton remembers him saying: “I don’t give a toss about the climate. You can build it out of rubber bands as long as it’s cheaper and faster.” The developer soon became a convert. “When you’re borrowing money at a high rate of interest and someone can shave six weeks off the building time that’s all he needed to hear,” said Thistleton. When the 29-unit Stadthaus opened, the apartments sold quickly. “People queued up and the flats sold out in two hours,” said Thistleton.

Maine may not be a skyscraper place. But it could become a CLT manufacturer center, as is being pursued now by many folks, including those at the University of Maine Advances Structures and Composite Center. And as Thistleton points out, CLT has a wide sweet spot. “As soon as you get to four stories building with CLT becomes a very realistic way , cost effective and quicker.”

One response to “Architect of the Timber Age coming to Maine”